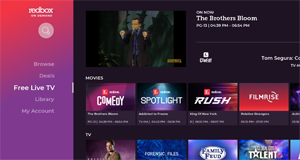 Remember when everyone was jumping into the over-the-top (OTT) game with cable alternatives? Sling TV, YouTube TV, Hulu, and others (minus the now-defunct Playstation Vue) are still alive and kicking, and content owners continue to roll out subscription-based services (Disney+, Apple TV, and HBO Max to name a few). But the next wave of streaming services appears to be free, ad-supported, linear (live-stream) TV, which includes industry-leader Pluto TV along with other participants such as Xumo, Stirr, and the just-launched watchyour.tv. Jumping into that mix this week is Redbox, known for its red kiosks where you can still rent DVDs and for its on-again, off-again streaming video on demand (VOD) service (which is still "on").

Redbox has updated its Roku channel and other apps to include over two dozen linear (so-called "live") TV and movie channels. While VOD is the way to go for a lot of people, there is still a large viewing audience that doesn't want to hunt through thousands of videos trying to decide on something they can commit to, whether it's a half-hour sitcom, a two-hour movie, or a weekend of binge-watching. Sometimes it's nice to just channel surf, and Redbox is now offering that option for free, with no registration required.

While Variety reports that Redbox Free Live TV "looks a lot like ViacomCBS’s Pluto TV," the Redbox interface is nowhere near as user-friendly. While Pluto has a traditional cable-like scrollable program grid showing what is currently streaming and what is on next on every channel, Redbox simply shows a menu with a thumbnail for each channel, essentially a duplication of its VOD menu. Each thumbnail helpfully lists the current show being streamed along with the start and stop times of each, but it's more difficult to pick a channel when programming is displayed in this manner versus the traditional grid.

Channels are available under the categories Movies, TV, Entertainment, News, and Kids and include well-known names like Filmrise, Gravitas, and Dove. You'll also find content from Fail Army, USA Today, TMZ, and America's Funniest Videos. You will find much of this same content on Pluto and other free services, but Redbox also has three Redbox-branded movie channels: Redbox Comedy, Redbox Spotlight (featured and recommended titles), and Redbox Rush (action and adventure). Redbox will reportedly be adding around ten new channels every month.

If you're currently a Redbox VOD or kiosk customer, don't worry - Free Live TV is just a new addition to the Redbox service and, for now at least, is not a replacement for purchase and rental of VOD titles or rental of DVDs.