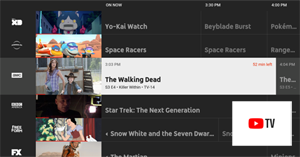 YouTube TV is now available on Roku, adding more competition to an already-crowded field of live TV streaming services dominated by Sling TV, DIRECTV NOW, and PlayStation Vue. While YouTube TV doesn't stand out in terms of price and channel lineup, it does offer an excellent user interface and some nice bonuses like unlimited cloud DVR and six logins per account. But don't look for it on the YouTube channel, it's on a whole new YouTube TV channel.

In terms of price and network programming, YouTube TV does little to distinguish itself from the more-established services, offering 40+ TV networks for $35 per month (a 7-day free trial is available). The following channels are currently available, but some channels are not available in all areas:

Where YouTube TV does stand out, though, is with its well-designed user interface and added features. Here's a rundown on what stood out, both the good and the bad, after spending some time interacting with the channel.