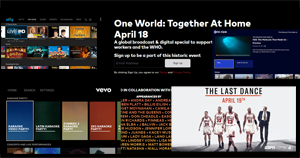 What's on Roku helps you find free entertainment on Roku. This week's recommendations include free access to Sling TV every evening, the One World: Together at Home global special that pays tribute to and celebrates frontline healthcare workers, ESPN's 10-part Michael Jordan documentary The Last Dance, and more!

Sling TV is offering free access to its Sling Blue package every night from 5:00 pm to midnight. In what it's calling "Happy Hour Across America," new Sling customers will get over 50 live channels, access to more than 50k on-demand movies and TV shows, free cloud DVR, and the ability to stream on 3 screens simultaneously. The Sling Blue package includes popular channels such as A&E, Bravo, HGTV, Discovery, Food Network and many more. And you don't even need a credit card, so you won't be billed when free access goes away. Sign up here with just your email address, a password, and your zip code.

H20: The Molecule That Made Us, a 3-hour series from WGBH Boston, premieres on PBS on April 22. "The film dramatically reveals how water underpins every aspect of our existence. Segments from across the planet, intimate documentary and natural history cinematography combine to uncover dramatic discoveries and compelling characters and deliver important stories about this mysterious molecule."

ESPN's 10-part Michael Jordan documentary The Last Dance premieres April 19 and can be streamed on EPSN's Roku channel. "Packed with unseen footage that has been under lock and key since Bill Clinton was president, the comprehensive 10-episode docuseries focuses on Michael Jordan and the Chicago Bulls’ quest for a sixth NBA championship," according to Deadline. Two new episodes will be made available every Sunday.

To stream the docuseries on the ESPN Roku channel, you will need to authenticate with a pay TV provider; participating providers include Hulu with Live TV, Sling TV, and YouTube TV. The docuseries will be available on Netflix as well.

Get your Roku-streaming friends together on Zoom for a virtual karaoke party. VEVO has a Karaoke Video Party playlist plus eight themed parties that include Latin, 2Ks, 90s, 80s, 70s, and Movie Songs. You can even have a karaoke party dedicated to Taylor Swift if you're so inclined. Unlike several now-defunct Roku channels, these are true karaoke videos that start by indicating the key and intro bars and display the lyrics while playing full instrumentals and backup singers.