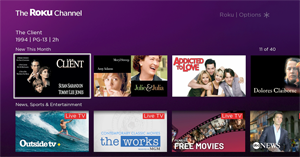 If you haven't watched The Roku Channel recently, now's the time to take another look. The free, ad-supported, streaming video service from Roku, Inc. has a lot of great new content available this month, and Roku is also unlocking episodes of popular shows from some the premium subscription services that are available through The Roku Channel.

Roku has added over 50 free movies to The Roku Channel this month. Some of our favorites are listed below, but you can find the full list of new movies on the Roku Blog.

The Roku Channel offers one-click subscriptions to four dozen premium streaming videos services like HBO, STARZ, Showtime, Cinemax, Epix, and Acorn TV. In an apparent effort to promote these services, Roku recently announced the availability of unlocked episodes of shows from some of those services. Roku said that unlocked content includes episodes from Showtime's "On Becoming a God in Central Florida," the EPIX series "Godfather of Harlem," "America The Story of Us" from HISTORY Vault, "Heartland" on Dove Channel, and Acorn TV's British series "Miss Fisher’s Murder Mysteries."

Visit this link for more information on The Roku Channel.