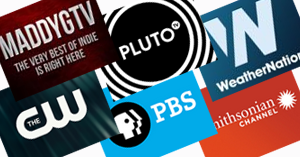 Are you overwhelmed by the sheer volume of entertainment available on Roku? Or do you think you have to shell out big bucks for subscription services to get good content? RokuGuide.com is here to help. Here are several suggestions for top-quality streaming content on Roku - and it's all FREE!

If you want to know more about what you eat, watch Food - Delicious Science on PBS. The series explores "the scientific story of your next meal. Michael Mosley and James Wong celebrate the physics, chemistry and biology hidden inside every bite." PBS has numerous other food and cooking shows as well. Here are just a few of our favorites (descriptions courtesy of PBS):

The CW is a rare offering by a major network that gives you free access without a cable or satellite TV subscription. You'll find over a dozen current and former popular shows including Riverdale, Supergirl, The Flash, Arrow and DC’s Legends of Tomorrow, along with the award-winning comedies Jane The Virgin and Crazy Ex-Girlfriend. Episodes are available the day after they air, and CW promises to "always have the last 5 aired episodes available so you can catch up."

MaddyGTV is a Roku-specific TV network with original shows and movies. Click the "MaddyGTV Original Series" button for several original series that include (descriptions courtesy of MaddyGTV):

Click here for more of our What's on Roku recommendations. Get notified of new postings by following Twitter hashtag #WhatsOnRoku.