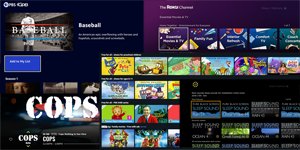 What's on Roku helps you find free entertainment on Roku. This week we have recommendations for five channels loaded with free content, including free kids and family TV and movies on Prime Video, Ken Burns' documentary Baseball on PBS, four new channels on Pluto TV, and more.

Amazon is offering free streaming of 40 kids and family shows on their Prime Video channel, including the Amazon Original series Just Add Magic, Pete the Cat, and The Dangerous Book for Boys. Also included are PBS series such as Mister Rogers' Neighborhood, Arthur, and Caillou, along with a number of family movies from IMDBtv such as Shrek Forever After, Scooby-Doo, and The Smurfs.

When Major League Baseball delayed this week's opening day, Ken Burns responded by making his Emmy-winning 1994 documentary series "Baseball" (1994) available for free streaming on PBS, including the PBS Roku channel. The 9-part series describes the story of baseball as "the story of America. It is an epic overflowing with heroes and hopefuls, scoundrels and screwballs. It is a saga spanning the quest for racial justice, the clash of labor and management, the transformation of popular culture, and the unfolding of the national pastime."

The Roku Channel has added a "Home Together - Entertainment for Everyone" category with a half-dozen categories of free content:

We could all use a little help in getting a good night's sleep during the pandemic, and meditation isn't a bad idea either. Relax Sleep Meditation Channel provides over a dozen soundtracks of soothing and relaxing sounds like ocean waves, forest noises, trains, and even a mother's heartbeat to help us relax, sleep, and meditate. Unlike many other "ambient sound" channels, the videos on this one have a dark screen to keep your bedroom dark at night.