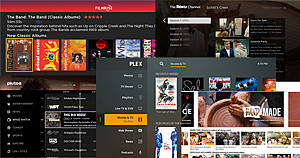 What's on Roku helps you find free entertainment on Roku. This week we have recommendations for five channels loaded with free content, including a documentary series about the making of classic albums on FilmRise, a video series about food-related artisans on Eater Food & Drinks, binge-watching channels on Pluto TV, free movies on Plex, and featured TV series on The Roku Channel.

Fans of classic pop, rock, and heavy metal will want to check out the "Classic Albums" documentary series on FilmRise. In this British TV series, "[t]he music, and its production, is dissected by the musicians and/or producer playing the multitrack recordings and singling out tracks that one does not usually consciously hear when listening to the music, giving insight into the way the sound is built up. Also, the individual musicians play back pieces, which are then blended with the original recording. Almost all songs are dealt with, focusing almost entirely on the music itself, how it was composed/realised."[1]

Titles include "Don McLean: American Pie," "Fleetwood Mac: Rumours," "Metallica: The Black Album," " U2: Joshua Tree," "Elton John - Goodbye Yellow Brick Road," "The Grateful Dead" Anthem to Beauty," and many more. From the FilmRise home screen on your Roku, scroll down to the "New Classic Albums" category to find 33 episodes.

Eater Food & Drinks is a Roku channel for foodies. Since our original review three months ago, Eater has added a new video series called "Handmade" in which artisans showcase their skills, trades, and techniques. Episodes feature a ceramicist showing how his team makes dinnerware for America's best restaurants, the complex and traditional process of hand-making tamales the way they have been done for generations, and what goes into hand-ripping three- to five-thousand noodle dishes a day at a family-owned NYC restaurant.

If you like to binge-watch TV shows, Pluto TV makes it easy to binge on several popular TV shows. Pluto has released a major redesign and upgrade to its free linear TV streaming service; among the changes is the addition of category shortcuts on the program grid to allow easier navigation. These shortcuts include a Binge Watch category with channels that include The Addams Family, Unsolved Mysteries, Cold Case Files, Fear Factor, This Old House, Doctor Who, and several others. But there are also binge-worthy channels in other categories - for example, the Baywatch channel in the Entertainment category lets you watch Lieutenant Mitch Buchannon and his team of buff lifeguards save lives 24/7.

Plex is known as a client–server media player system that allows users to stream personal videos, music, and photos from a personal computer to media devices like Roku. Many people don't know, however, that Plex app on Roku and other devices now includes a free streaming service that doesn't require you to install the media server on a home computer. Launch Plex on your Roku, then scroll down the home screen to "Movies & TV on Plex" where you'll find a large library of content in categories such as Cult Faves, Festival Favorites, Zombie Invasion, and Blood Drive, along with traditional genres like Comedy, Horror, Drama, and Thriller. Recently-added titles include the 1972 version of "Call of the Wild" starring Charlton Heston, which tells the story of Buck, a domestic pet dog stolen from a California ranch and sold to pull mail in the Yukon in the 19th century and the effort to adapt to his harsh new life; "Open Water 2: Adrift," a 2007 drama about a weekend cruise on a luxurious party yacht that goes horribly wrong for a group of old high-school friends when they forget to put the ladder down before jumping into the ocean and find it impossible to reboard; and
"Meatballs," a 1979 comedy starring Bill Murray that Newsweek described as "Animal House goes to summer camp."

The Roku Channel has added several new TV shows to the free (ad-supported streaming video service. Featured TV series on The Roku Channel include the first five seasons (2015-2019) of "Schitt's Creek," a Canadian TV sitcom about a wealthy family that lose their fortune and relocate to two adjacent rooms in a run-down motel in a small town; 17 seasons (2005-2018) of "Hell's Kitchen," an American reality competition television series hosted by celebrity chef Gordon Ramsay; and 14 seasons (1996-2011) of "Forensic Files," a documentary-style television program, originally aired on TLC, that reveals how forensic science is used to solve violent crimes, mysterious accidents, and outbreaks of illness.