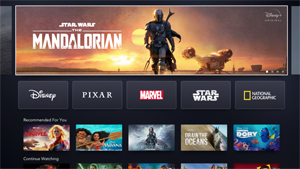 Disney+ has launched its new video streaming service on Roku with an extensive library of films and television series from Disney, Pixar, Marvel, Star Wars, and National Geographic. For $6.99 per month (or $69.99 per year) after a 7-day free trial, subscribers have unlimited streaming of a wealth of content that includes recent films, original series, popular TV shows, vintage animations, and popular titles from the Disney vault.

At launch, Disney+ includes recent releases such as "Captain Marvel," "Dumbo," "Avengers: Endgame," "Toy Story 4," "The Lion King," "Frozen 2," and "Star Wars: The Rise of Skywalker," along with classic kids' favorites like "The Lady and the Tramp," "Snow White and the Seven Dwarves," "Fantasia," and "Pinocchio." Dig deeper into the Disney library and you'll find titles going all the way back to the 1928 short film "Steamboat Willie" with Mickey Mouse.

Also available are plenty of popular TV series, including "The Simpsons," "Amazing Planet," and "That’s So Raven." By the end of the first year of operation, Disney+ is expected to have more than 7,500 episodes of television and 500 movies in the U.S. For more information on the vast Disney+ library, you can watch the 3-hour preview below, or just sign up for a 7-day free trial and see for yourself.

In addition to Roku devices and Roku TVs, Disney+ is currently available on web browsers, iOS, Apple TV, Google Chromecast, Android, Android TV, PlayStation 4, Sony TV, XBOX One, Amazon Fire TV, and Samsung and LG devices. Disney+ is currently available in the US, Canada, and the Netherlands, and will be available in Australia and New Zealand starting November 19th. Disney has also confirmed that it will launch in the UK, Germany, Italy, France, and Spain on March 31, 2020.

Visit our Disney+ Roku channel page for more information and instructions on how to get the Disney+ channel on your Roku.