Prince of Persia Remake for Roku

Channel Description: Prince of Persia Preview takes a trip back to 1989 and the poor (by today's standards) graphics that were all the rage 25+ years ago. Originally published by Brøderbund for the Apple II, the game was eventually ported to many other platforms, including Amiga, Atari, MS-DOS, Sega, and Game Boy.

The plot of the game, which is set in ancient Persia, revolves around a wizard, Jaffar, who seizes power while the sultan is in a foreign land. The Sultan's daughter blocks his ascent to the throne, so Jaffar locks her in a tower, ordering her to become his wife less she die within an allotted amount of time. The Princess is in love with a nameless protagonist , who is imprisoned in a dungeon. The objective is the make sure the protagonist escapes the dungeon, gets to the palace tower, and defeats Jaffar before time runs out to free the princess.

Before playing, you have several options from the game's home screen:

Control Mode shows you the operation each button on your Roku gaming remote, in both vertical and horizontal mode (screenshots are shown below for reference while you play). The enhanced gaming remote is not required, but makes game play much more enjoyable.

Gaming Mode lets you choose between IBM-PC and Macintosh Classic.

Mods & Cheats lets you select from the original game or mods like 13 new levels. You can also change the fight mode from Attack to Alert or Frozen, select what the REW, FF, and OK buttons on your remote do, and select whether or not to save your game when you exit.

The following information was provided by the channel developer:

Complete remake of the classic game Prince of Persia (1989).

A demo video of the game play can be viewed below. 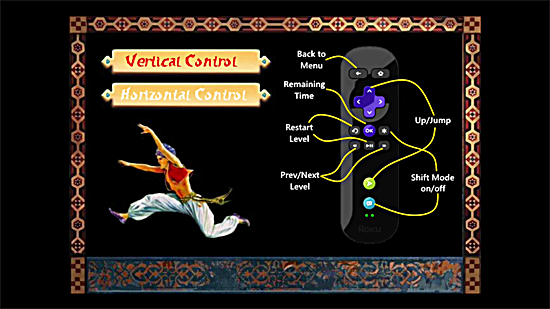 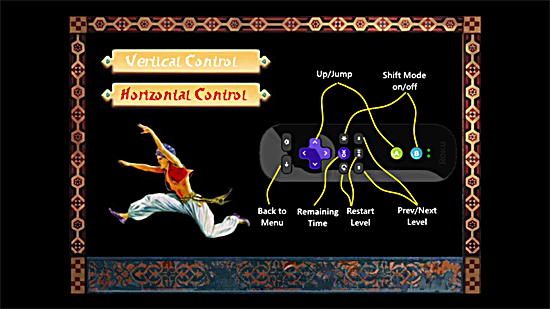