What's on Roku - Animated series from Adult Swim, sci-fi on Comet TV, nature and history series on Smithsonian, and more! 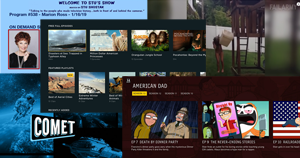 What's on Roku helps you find free entertainment on Roku. This week we have recommendations for five channels loaded with free content, including 50+ animated series from Adult Swim, episodes of history and nature shows on Smithsonian Channel, chats with classic TV show celebrities on Stu's Show, science fiction series on Comet TV, and more!

Comet TV, an over-the-air digital channel often found on secondary channels in many markets, also has a free Roku simulcast. If you don't have an antenna, or your local broadcasters don't offer this channel, you can still watch Comet TV's broadcasts of Babylon 5, Mystery Science Theater 3000, Stargate SG-1, New Outer Limits, and Cult Classic Theater. Information on this month's offerings can be found here, while a full programming schedule is available at comettv.com/schedule

Likewise, you don't need cable TV to enjoy Adult Swim, Cartoon Network's nighttime block of programming that features animated series more suitable for adults. You'll need to subscribe to a participating pay TV provider to watch the simulcast on this Roku channel, but you can still enjoy lots of free programming on demand. The Adult Swim Roku channel has full seasons of over 50 shows, daily live programming on the [as] stream, and free marathons - all for free with no activation required. Free shows include Rick and Morty, The Venture Bros, Robot Chicken, American Dad, Aqua Teen Hunger Force, Bob's Burgers, Family Guy, and many other popular programs.

If you like to laugh at other's misfortunes, FailArmy is for you. FailArmy provides a nonstop live stream of nut kicks, skateboard falls, sporting accidents, and other stupid human tricks, as well as plenty of animal hijinks. Think of it as America's Funnies Videos without the inane banter and annoying dubbing. You can watch the FailArmy live stream on Pluto TV and xumo, and on the dedicated FailArmy Roku channel, which also has a VOD library that includes Fails of the Week, FailArmy Originals, and the FailArmy Hall of Fame.

Smithsonian Channel requires a subscription for full access, but also has a number of unlocked episodes for free streaming. Free content includes Disasters at Sea: Trapped in Typhoon Alley, about a violent storm that doomed a massive cargo ship and launched a 20-year investigation; Orangutan Jungle School, which follows young orangutan orphans on their journey back into the wild; and The Day We Walked on the Moon, which revisits the first lunar landing in real-time as its most perilous and triumphant moments are highlighted.

Fans of classic TV will enjoy Stu's Show, with episodes that feature "in-depth discussion of lives, careers, behind-the-scenes memories, as well as recollections of events and programs we all grew up watching." Among other qualifications, host Stu Shostak has worked in TV since the 1970s, is the owner/operator of a company dedicated to the preservation of 1950s TV shows, and was Lucille Ball's personal film archivist for the last ten years of her life. The show streams live every other Wednesday at 7:00 pm ET/4:00 pm PT, but you can also watch a number of recent episodes, including actress Marion Ross talking about her 11 seasons playing Mrs. C. on Happy Days and Beverly Washburn taking about her long that spanned being a child actress on Dragnet and The Red Skelton Show to later roles in Star Trek, Gidget, and many other shows.