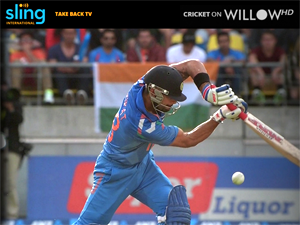 Cricket fans in the U.S. will have expanded coverage of live international cricket matches through an expansion of a relationship between Willow TV International and Sling TV and it's parent DISH. International Cricket Council (ICC) events will now be included at no additional charge to Sling TV and DISH customers who receive the Willow cricket channel, starting with the ICC World Twenty20 2016, which begins March 8, 2016.

The Willow cricket channel is included with the Sling TV World Sports package and South Asian Sling International packages. Willow offers HD streaming of some of the world’s most popular cricket matches and events, including ICC, India, Pakistan, Australia, South Africa, West Indies and other top teams, to cricket fans in the U.S. through Sling TV packages on Roku LT and higher streaming media players. The Sling TV packages are also available on many other connected devices, including Amazon Fire TV players, Chromecast, Xbox One, Android and iOS devices, and computers.

The announcement by Sling TV and Dish quoted Chris Kuelling, senior vice president of programming, as saying "We are proud to have supported the launch of the Willow cricket channel in 2010, and by extending this longstanding relationship, we are not only bringing our customers the best in live cricket for years to come, we're delivering on our commitment to make Sling TV and DISH 'your home for cricket.' With this agreement we are now able to bring U.S. viewers the most comprehensive cricket offering in the market, all in high definition.”

"In just over five years since we launched Willow on DISH, we have expanded our coverage of live international cricket to unprecedented levels," said Vijay Srinivasan, CEO of Willow TV International. "We are extremely pleased to further strengthen our partnership with Sling TV and DISH, and to announce the availability of the ICC World Twenty20 2016 and other ICC events on the Willow cricket channel for Sling TV and DISH viewers."

Sling International packages start at $25 per month. Price varies by language and is available for the following languages (note that Willow Cricket is included only with South Asian packages):