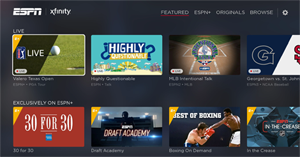 The WatchESPN app on Roku has been rebranded and is now just "ESPN." The user interface is also sporting a new look, but the biggest update to the app is the addition of the ESPN+ subscription service.

Launched earlier this month, ESPN+ is a direct-to-consumer offering from ESPN's parent Disney, which promises to "offer fans a dynamic lineup of live sports, original content and an unmatched library of award-winning on-demand programming – all for a subscription price of $4.99 per month" or $49.99 per year. The service will offer more than 180 MLB and over 180 NHL games; exclusive access to the entire MLS Live out-of-market schedule with more than 250 games; thousands of live college sports events, from over a dozen conferences; 50 days of live competition from 20 PGA TOUR events; three of the annual Grand Slam tennis events with hundreds of men's and women's singles and doubles matches; and hundreds of matches from international rugby and cricket.

What you won't be getting with ESPN+ is an alternative to the the linear ESPN channels available on pay TV services. As Anthony Ha states it in a TechCrunch article, "ESPN is treating its ESPN+ content as something almost entirely distinct from its traditional TV offering. So unlike, say, an HBO Now subscription, ESPN+ really wouldn't serve as a replacement for what you'd get as a cable subscriber."

But if you do subscribe to a participating pay TV service with a package that includes ESPN, you can authenticate the ESPN Roku app and get access to live streaming of ESPN's eight U.S. networks — ESPN, ESPN2, ESPN3, ESPNU, ESPNEWS, ESPN Deportes, SEC Network, and Longhorn Network – along with on-demand access to full episodes of popular ESPN shows.

If you're a cordcutter who doesn't want to shell out any money for the ESPN+ service, you're not completely out of luck. You can still get sports scores and watch news, video highlights, and clips, features and analysis, and even some full-length shows.

Click here for more information on the updated ESPN Roku app, including screenshots of the new user interface.