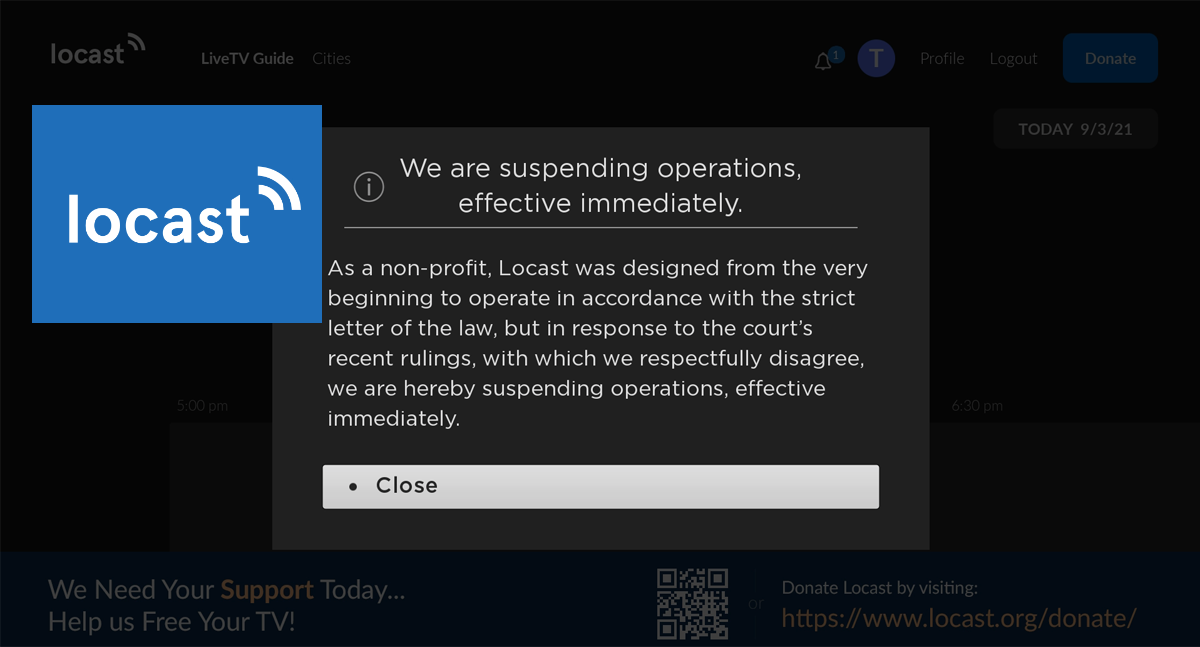 Locast, a streaming service that streamed local over-the-air broadcasts to Internet users, has shut down the service after a federal judge denied a request Locast for summary judgment in a copyright infringement lawsuit filed by ABC, CBS, NBC, and Fox. As of the date of this article, the Locast app was still available in the Roku channel store, but when launched the app provides the following notice:

Locast operated in nearly three dozen markets by taking OTA signals from local TV stations and retransmitting them over the Internet. The concept is similar to the now-defunct Aereo, which filed for bankruptcy five months after the Supreme Court ruled in 2014 that it violated copyright law. However, Locast used a loophole in U.S. copyright law to assert that its operation was legal because some not-for-profit companies are allowed to re-transmit broadcast television signals re-transmission agreements with station owners.

As a non-profit, Locast did not charge users for service, but it did solicit donations from users and would interrupt streaming every 15 minutes for users who didn't make a donation. In denying Locasts's request for summary judgment on Tuesday, the federal judge noted that Locast raises over $4.3 million in donations last year, while incurring only $2.4 million in operational expenses. The order written by District Judge Louis Stanton stated, "Based on the undisputed facts, it is clear that the Locast service is not offered without charges other than those 'necessary to defray the actual and reasonable costs of maintaining and operating' its service. The payments defendants elicit from users are charges assessed on users to avoid constant service interruptions...[it] is not merely a recurring gift to a charitable cause."

Excess funds were used to expand Locast's operations in cities other than were Locast users were based, and the judge also said there are no provisions in the copyright law that would allow Locast to use donations to expand the company.

Fierce Video noted that "[t]he order denying Locast's motion for summary judgment means the case against the streaming service is likely headed to trial. The broadcasters who are plaintiffs in the case are seeking unspecified monetary damages from Locast and its founder, David Goodfriend, as well as an order that would effectively shut down the streaming service." However, it is not know whether Locast's voluntarily shutdown will result in an end to the lawsuit, but the plaintiffs could continue to seek monetary damages and a court order to prevent Locast from resuming operations.

There is also no word on whether donations will be refunded to Locast users, but if you have signed up for a recurring donation you will obviously want to immediately cancel any further payments. Although Locast has suspended its video operations, the website still works (and is still accepting new donations) and provides the instructions below.

How to cancel your Locast recurring donation