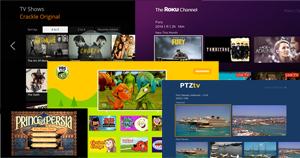 Amazon and Netflix get all the press about original programming, but did you know that Crackle has also produced a number of original movies and TV series? One of these is 'Going From Broke,' an unscripted series about personal debt that passed five million views in its first four weeks on Crackle. This series, which comes from executive producer Ashton Kutcher and premiered in October 2019, is "focused on helping millennials overcome their crippling financial struggles... Going From Broke host Dan Rosensweig, CEO of Chegg, and financial expert Danetha Doe work with young people to get out of the hole and become the CEO of their own lives."

Over three dozen new titles are available on The Roku Channel this month, including a Batman double feature (The Dark Knight and Batman Begins), Caddyshack and Caddyshack II, and a number of classic Bond films. Other hit movies include John Grisham’s The Rainmaker about an underdog lawyer who takes on a fraudulent insurance company; A River Runs Through It, which tells the story about two sons of a stern minister — one reserved, one rebellious — growing up in rural Montana while devoted to fly fishing; and Legends Of The Fall, about three brothers and their father who are living in the remote wilderness of Montana in the early 1900s and are affected by betrayal, history, love, nature, and war. See the full list of this month's new movies in this Roku blog post.

PBS KIDS provides thousands of hours of free content for children, including popular shows like Sesame Street, Curious George, and Clifford The Big Red Dog. Although all content is free, you will need to activate the channel by loggin in with Facebook or Google, or by creating a free PBS account and consenting to receive email from your local PBS station.

Wishing you were somewhere warm and sunny? Go to the PTZtv channel and select a live webcam to watch cruise ships entering and leaving Port Nassau, or catch panoramic live views across St. Maarten's Great Bay. Those are just two live webcams available on this channel. In addition to these and other ports, you'll find views of beaches, cities, wildlife, and even a kitty cam.

If you don't want to just sit on the couch and watch videos, Roku has plenty of games you can play, including these free retro video games from the 1980s: Retaliate, which is very similar to the popular Space Invaders video arcade game; Lode Runner, where you must collect all the gold in a level while avoiding guards who try to catch you; and Prince of Persia, originally published by Brøderbund for the Apple II and eventually ported to many other platforms, including Amiga, Atari, MS-DOS, Sega, and Game Boy. (The last two games are private/non-certified channels; see this article for more information on how to install private Roku channels.)