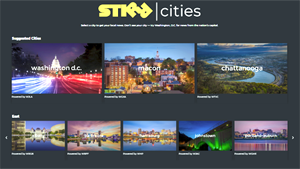 Sinclair Broadcast Group launched STIRR, a free ad-supported streaming service, on Wednesday, combining local coverage with live streams from national online networks. Sinclair is the largest television station operator in the US both by number of stations and by total coverage. The company owns or operates stations in over 100 markets, covering 40% of American households [1] from many of its drawing on local news, sports and other programs from the 191 TV stations it owns in 89 U.S. markets.

Available on Roku, Amazon Fire TV, iOS and Android devices, Apple TV, and the web, STIRR offers a curated selection of local news, sports, and entertainment from several dozen Sinclair stations across the US. Users can select any local station available, although the app will recommend stations based on the user's location. If there isn't a nearby station, STIRR recommends WJLA in Washington, DC. City-dwellers are likely to be underwhelmed by this feature, however, as the majority of the stations are in secondary markets with little representation from major metropolitan areas. In Atlanta, for example, Macon, Georgia, and Chattanooga, Tennessee are the nearest TV stations available on STIRR. You will find some larger cities, though, including Baltimore, Nashville, and Las Vegas.

Although STIRR draws content from local stations, you won't find a live feed of any local broadcasts, nor will you find any primetime network programming. Instead, local content is presented as video on demand. You'll find it on the app's main screen under "STARR First," which weaves local content in with national news stories.

STIRR also has a selection of over 20 live streams, with more reportedly in the works. STIRR also has three of its own branded live streams - STIRR Sports, STIRR Movies, and STIRR Life - along with names many will recognize, like Cheddar, Dove, FAILARMY, BUZZER, World Poker Tour, Comet, Gravitas Movies, and NASA. Most of these streams are already available elsewhere, however, as either standalone apps or in other linear services like Pluto TV. If you do want to use the live streams, select the channel guide from the menu bar at the top of the screen for a traditional grid-style programming schedule.

The STIRR service is rounded out with five categories of VOD: Best of the Week, Browse All Films, TV Shows & Web Series, Games & Highlights, and Food, Fitness & More. Under some of these categories, you'll again find local content interwoven with national content. Sports, and an example, provides live feeds of local high school games (again, for your selected city) as well as the live streams from World Poker Tour and The T (a streaming service from The Tennis Channel), and VOD from both local and national sports events.

As for films and TV, this is not Netflix or Prime Video. Films are available in the genres of Action, Comedy, Documentary, Drama, Family, and Romance, but you'll find just a handful of titles in each. Likewise, you won't find enough under TV to prompt you to cancel your Hulu account.

As we said in our STIRR Roku channel review, STIRR will likely be popular for those interested in local news, sports, and events if your local station is one of those available on this channel. If you're here for the live streams, you'll find much of this content, and more, already available elsewhere on Roku and other devices.