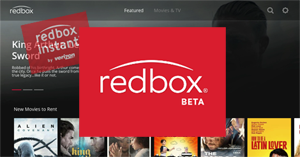 Redbox, which rents DVDs, Blu-ray discs, and videos games from the familiar bright red kiosks, exited the streaming video business when they shut down their Redbox Instant by Verizon service in 2014. But that story apparently isn't over yet, as Redbox is testing a new invitation-only service called Redbox On Demand. On its On Demand Beta FAQs page, Redbox states that the service "is currently in a closed beta, which means we're testing the basics, like functionality, with a limited number of people. As we test and learn from our customers, we will make evaluations that determine any future course of action for the service."

Part of that closed beta includes testing on Roku, which is being done with a private Roku channel called Redbox Beta. Only invited beta testers are able to buy and rent videos through this channel, but anyone curious about what Redbox on Demand might look like (if it actually launches) can install the channel, look around, and even stream free trailers.

More information on the channel, including screenshots, can be found on our Redbox Beta channel page.

If Redbox on Demand becomes reality, the final offering look completely different than the beta version. In fact, just a year ago Variety reported that Redbox was testing a streaming service called Redbox Digital. That test was conducted using an iPad app that has since been rebranded as Redbox On Demand, although the three comments currently available all state that the app does not work.

Currently, Redbox on Demand on Roku launches on a "Featured" screen that displays 20 "New Movies to Rent" and 20 "Trending Movies" and 11 "Popular TV Shows." There is a fourth and somewhat-unusual category called "Birthday Showcase: Robert De Niro." He turns 74 today (August 17th), so this category is timely. I will have to check back to see how whether the Birthday Showcase changes daily or if it was just a coincidence that I reviewed the channel on this day.

In addition to Featured, there is a second main category, Movies & TV, available in a menu ribbon at the top of the launch screen. From the Movies & TV screen you can choose from Movies, Collections, Family, and TV. Only four categories of Movies are available: New Movies to Rent, $1.99+ Rentals, New Movies to Own, and Aviation Movies. Why aviation? I have no idea. Since this is a beta, I'm guessing that this is just to show the concept, and any final version would include a much longer list of categories, or offer movies by traditional genres such as Drama, Romance, Comedy, Documentary, and so on. Aviation seems better suited for the Collections option, which has only four offerings: Action Packed, Comedy Hour, Sports Movies, and Coming of Age.

Some Redbox fans may be disappointed that not all videos can be rented. Season 1 of Mad Men, for example, is only available for purchase (prices start at $19.99 for the season or $1.99 per episode). As for movies prices, here are a couple of examples for recent movies: "Alien: Covenant" is $17.99 to purchase or $4.99 to rent, while "King Arthur: Legend of the Sword" is $15.99 to purchase and $4.99 to rent. Older films are cheaper to rent, but not much cheaper to buy: "Pulp Fiction" (1994), for example, can be rented for $1.99 or purchased for $12.99, and same applies to "The Hurt Locker" (2009) and "The English Patient" (1996). Note that all prices are stated as "from..." Presumably, these are the prices for SD quality, and HD quality will be higher; however, I don't have the privilege of being an invited beta tester, which you must be to see all available prices.

It remains to be seen whether Redbox will ever move Redbox on Demand out of beta. They seem to be in no hurry to do so, as evidenced by the Redbox Digital beta that was in progress more than 12 months ago. And, as we reported in a recent Cordcutter News Brief, Redbox CEO Galen Smith told the Chicago Tribune that a lot of their customers are cord-cutting Millennials who "may not be able to afford being able to spend $5.99, $6.99 or more for a (video on demand) rental." Surprisingly, "an average kiosk in a year will do $50,000, $60,000 in revenue" according to Smith. With that kind of cash flow from physical DVDs and Blu-ray discs, the strong competition from other streaming video services, and the failed Redbox Instant service, Redbox is likely in no hurry to jump back into the streaming business.