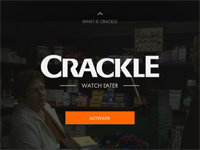 Crackle has updated their popular Roku channel with a live stream and easier browsing of movie and TV show titles. But if postings by some reddit users are any indication, some people are confused about how to navigate within the channel. The "new" Crackle also requires viewers to activate their Roku, linking it to a Crackle account, creating concerns that the registration requirement is an invitation for spam. I'll explain how to navigate through the updated Crackle channel, but let's first address registration (if you don't register, navigation won't matter).

When you first load Crackle you will have only two options: Scroll up to watch a promo video for Crackle, or scroll down to activate your Roku and unlock the channel's content. To activate, visit crackle.com/activate and either login or create a new account. Once you're logged into the website, enter the activation code shown on your TV screen. The Crackle channel on your Roku should automatically unlock within a few seconds.

As for spam, I've had a Crackle account since 2011 and have never received a single e-mail that I didn't request. 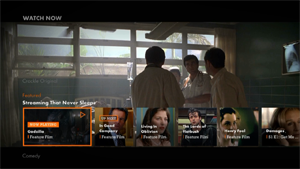 Now that you've unlocked Crackle, you may find navigation to be somewhat less than intuitive. Here are some tips for getting the most out of Crackle 2.0.

Crackle launches in auto-play mode. You'll see the title of the video currently being streamed and you'll have two seconds to take another action before it starts. This is a live stream, so chances are you'll be somewhere mid-movie. An on-screen tip advises you to press the restart button on your remote to start the video from the beginning. That is incorrect. The restart button (that's the back-arrow button) brings up the main menu, which offers access to the live stream, the on-demand TV and movie libraries, and "My Crackle," where you'll find your video queue. To start the current video from the beginning, you'll need to press the Pause button, which brings up the video controls at the bottom of the screen. Use the remote's left arrow to scroll to the left-most option and press OK to restart the current video. 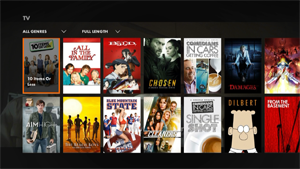 If you don't want to watch the auto-play feature film, use that restart button to bring up the main menu at the top of the screen. Select either TV or Movies to open the video-on-demand library of your choice. You'll notice that the auto-play video is still playing in the background. Unfortunately, I have not found a way to kill this annoying background play. The best I can do is pause it, but you have to do that while the video is playing in the foreground, before you go to the video library.

The VOD library is one area where Crackle 2.0 is an improvement. Here you have the ability to filter the library by genre. You can also filter results to show only full-length videos, clips, or trailers. To filter, just use your remote's up arrow to highlight All Genres and select OK to display the full list of genres. Scroll down to the genre you want and press OK to select. Highlight the genre again and use the right arrow to highlight Full Length; press OK to select either Clips or Trailers.

In the TV library, select the show you want to watch and press OK. From the show's splash screen you will be able to watch the first episode, save it to your Watch Later queue, or pick another episode or another season. It may not be obvious, but you use the down arrow until an orange line appears under All Seasons. Press OK on your remote to display a dropdown menu of all available seasons. You can select a single season so that you don't have to scroll all the way across every episode of every season to find what you want.

Two pushes on the restart (back-arrow) button again give you access to the main menu. Go into the movie library to browse available titles. The problem here, which is the same for individual TV episodes, is that there is no splash screen to give you a synopsis, cast, date, etc. To get this information, start the movie or TV show and wait for the ad to finish. Press your remote's pause button, then the up button. Select the option to see more information and that's where you'll find the details.

Go back to the main menu and you can access My Crackle, which is where you will find your Watch Later queue. Any videos that you started but didn't finish will also be listed, along with recommendations. There is also an option to deactivate your Roku device, unlinking it from your Crackle account.

There's another menu that's somewhat hidden. Press the up or down button while a video is playing and you can browse Crackle's featured titles in several genres, including "Last Chance to Watch," which lists titles that will soon be leaving Crackle. This is also where you'll find three "Guided Tour" videos that show how to get started with the channel, how to navigate it, and how to use My Crackle.

After spending a significant amount of time with Crackle 2.0, I still don't find the controls to be intuitive. The back-arrow takes you to the main menu - but only sometimes. If an overlay is active, such as the video controls for pause, fast-forward, etc., the back-arrow cancels that action. It takes another press of the back-arrow to bring up the main menu. But press it one time too many and you'll be asked if you want to leave the channel.

There are also a number of glitches that need to be fixed. After several visits to the channel, it suddenly refused to load, returning me to the main menu after loading the orange splash screen. I had to delete and reinstall the channel to get it to function. There were several times that the channel appeared to load but only gave me a black screen; I had to return to the Roku main menu and launch Crackle again. After viewing details about one movie and exiting that screen, an orange "loading" circle kept spinning on the screen while the movie played. I couldn't reload movie details and couldn't get the spinning circle to stop )even though the movie had loaded just fine) without exiting the movie and starting it again. And then there's that incorrect "tip" about how to restart a video from the beginning.

Crackle 2.0 on Roku does offer some slick features, and the library filtering is nice. All things considered, though, if you just want to sit back and watch a video you may find yourself frustrated and annoyed as you try to figure out how to get to the video you want to watch.