What's on Roku - Free movies on Vudu, PGA Tour Channel on Pluto, recent TV episodes on The CW, and more! 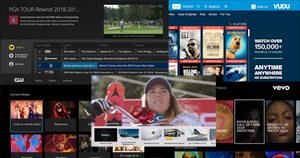 What's on Roku helps you find free entertainment on Roku. This week we have recommendations for five channels loaded with free content, including free movies from VUDU, The PGA Channel on Pluto TV, outdoor adventure videos from Outside TV, music videos from 2020 Rock & Roll Hall of Fame inductees, and more!

VUDU, the streaming video-on-demand service from Walmart, isn't just a fee-based service. VUDU also offers a large library of free, ad-supported movies, with 123 titles added to the free category this month. New titles this month include Killing Them Softly, a 2012 crime drama starring Brad Pitt an enforcer who is hired during the economic turmoil of 2008 to restore order after three idiots rob a mob-protected poker game; Poseidon, the 2006 remake of the 1972 disaster film in which a luxury ocean liner capsizes after being swamped by a rogue wave, with the survivors fighting for their lives as they attempt to escape the sinking ship; and Open Season, a 2006 children's animation about a grizzly bear that finds himself stranded in the woods days before hunting season and rallies with other forest animals to form an army against the hunters.

The ViacomCBS-owned linear streaming platform Pluto TV has added the PGA Tour channel with round-the-clock golf coverage. Pluto says that PGA Tour, found in the app as channel 477, provides "highlights from every tournament plus player interviews, player profiles, tournament previews, swing analysis and all the greatest shots and amazing moments." According to The Streamable, "[t]here will also be live Featured Hole coverage on Saturdays and Sundays for 23 events."

You don't need cable or an antenna to keep up with your favorite shows on The CW Network. The CW on Roku lets you watch recent episodes of shows such as Batwoman and Nancy Drew, two new series that you can stream from the beginning, and Riverdale, which several recent available, with new episodes available for streaming on Thursdays. Also available are highlights and cast interviews.

If you can't get outside to surf, snowboard, or mountain bike, watching others doing so is the next best thing. Outside TV on Roku provides a free live stream of content from the active adventure lifestyle network that is based on Outside Magazine. Current content includes episodes of Woodward Peace Park, A Matter of Time, and Xterra Adventures.

You can watch music videos from the 2020 Inductees into the Rock & Roll Hall of Fame on VEVO. VEVO has created a specialty playlist with videos by inductees Whitney Houston, Depeche Mode, The Notorious B.I.G., Nine Inch Nails, and The Doobie Brothers. (The sixth inductee, T. Rex, is not represented in this playlist.)