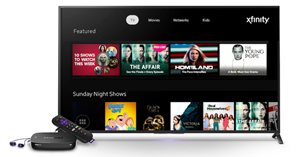 Roku isn't just for cordcutters. The Time Warner Cable app, now merged with the Spectrum TV app, is consistently one of the 25 most-watched Roku channels despite the fact that it requires a cable TV subscription. And now Comcast has created it's own Roku app for Xfinity TV subscribers. But the channel is still in beta and has a number of limitations. Here is what you need to know about the new Xfinity TV Beta app for Roku.

First, keep in mind that as a beta app you can expect some bugs and lack of functionality. Comcast says that it is releasing the app in order to get feedback prior to the official launch. They don't give specific instructions on how to give that feedback, but they do direct users to the Xfinity TV on Roku thread on forums.xfinity.com, where you can post comments and questions.

To answer the inevitable question: No, you cannot use the Xfinity TV Beta app unless you are an Xfinity cable TV or Xfinity Stream subscriber. Reportedly due to hardware restrictions, you must also be an Xfinity Internet subscriber. TV-only customers won't be able to use this beta app, but Comcast says that it is "working hard to make cable-only gateway equipment available soon" so that customers with 3rd-party Internet service can use the Roku app.

Also note that you must have a Roku device running firmware version 7.5. Comcast identifies the following Roku models as being compatible:

Visit this Xfinity Forums page for a complete list of requirements and restrictions.

Assuming you have the right hardware (from both Roku and Comcast) and the right subscriptions, the Xfinity TV Beta app will let you access your Xfinity TV cable channels, including live and on-demand programming, on your Roku device from within the home serviced by your Xfinity TV and Internet accounts. X1 Cloud DVR can also watch their cloud DVR recordings.

Some of you are wondering why you need the Roku app if you already get Xfinity cable TV. At one point it was thought that by streaming Xfinity TV through a Roku device, you could avoid the rental fees associated with a cable box. However, Ars Technica got confirmation that Comcast will charge extra fee for watching TV on Roku boxes, resulting in a savings of only $2.50 per Roku-connected TV: "Customers who use a Roku as a 'primary outlet' after the beta is over will get a $2.50 credit on their bill; the 'primary outlet' isn't an itemized fee but is included as part of paying for a TV subscription. Using a Roku as an 'additional outlet' will cost $9.95, but the $2.50 credit will lower the price to $7.45." Charging customers for each TV to which Xfinity is streamed greatly reduces the attractiveness of this app.

For more information on the Xfinity TV Beta app for Roku, visit the following resources: