Roku, Inc.'s war on piracy has been well-documented. Following a Mexican court order banning the sale of Roku devices in Mexico, the company has been actively shutting down Roku channels when claims are made of alleged copyright infringement. Gone are popular niche channels like XTV, USTVNow and cCloud, but nobody expected giants like Netflix, YouTube, and FoxSportsGo to get caught up in the anti-piracy crackdown. That, however, is exactly what happened on Tuesday.

For several hours, a number of users received Roku's FBI anti-piracy warning, shown below, instead of the expected content. Twitter users reported that the above channels were affected, along with Hotstar, YuppTV and Gaia. Even FandangoNow, which powers the Movie Store and TV Store on Roku's own home screen menu, was impacted. 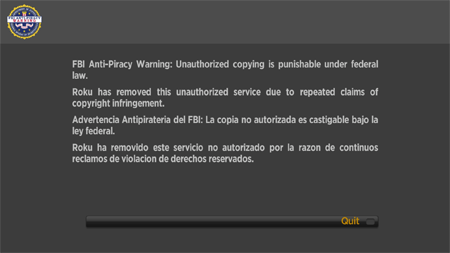 Although this sounds like the act of hackers seeking retribution for the removal of other channels, it seems that it was a technical glitch caused by Roku's own actions. CNET reported that Roku issued a statement saying "We use that warning when we detect content that has violated copyright... Some channels in our Channel Store displayed that message and became inaccessible after Roku implemented a targeted anti-piracy measure on the platform." We can presume that Roku engineers were shutting down one site and inadvertently extended that shutdown to several legitimate channels in the process.

(Story continues below the ad.)

Roku Support first tweeted that they were aware of the problem around 9:30 pm Eastern time Tuesday, and just after midnight they tweeted "We're back! Netflix and YouTube are working along with most channels in the Channel Store." They also provide instructions for affected users to "Go to Settings> System> System update> Check now. For some channels, you may need to log in again." However, as of this afternoon some Twitter users are still reporting problems despite following these instructions. At least one user was able to resolve their issue by also restarting their Roku. 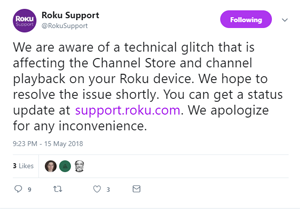 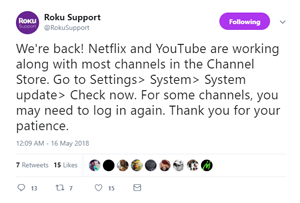 If you're having Roku problems related with the above issue, you can contact Roku support at support.roku.com or by tweeting @RokuSupport. RokuGuide.com is not affiliated with Roku, Inc. and is unable to provide technical support for your device or with any Roku channels.