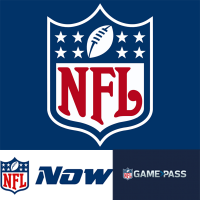 NFL fans looking for preseason action on NFL Now are finding that the app has been shut down on Roku and other devices. NFL Now is not going away, it's just being retooled for the 2015 season. A video on now.nfl.com announces that the standalone app will no longer be available, but will be available on NFL Mobile, at NFL.com/Now, and will be part of a new NFL app on connected TV devices. On Roku, a new NFL channel will offer access to both NFL Now and NFL Game Pass. DirecTV's NFLSUNDAYTICKET.TV will also be available on Roku and other connected devices. 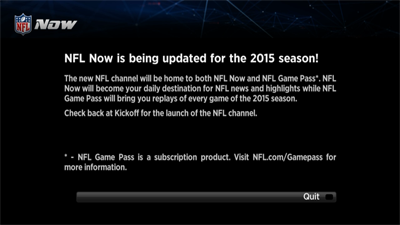 The current Roku NFL Now splash screen announces that "NFL Now will become your daily destination for NFL news and highlights while NFL Game Pass will bring you replays of every game of the 2015 season." Launched on Roku in August 2014, NFL Now offered free access to game highlights, press conferences, and videos from NFL Films, the 32 NFL teams, NFL.com and the NFL Network cable channel. The channel included over 350 hours of archived material, including team highlights and 30 hours of Super Bowl footage from 1967-2009.

The NFL has also announced the availability of DirecTV's NFLSUNDAYTICKET.TV on Xbox 360, Google Chromecast, and Roku. The NFL package, which offers a variety of services including live out-of-market NFL games every Sunday afternoon, was previously available only on Windows, Android and iOS smartphones, tablets and computers (via the Web), Xbox One, Sony PlayStation 4 and PS3.

NFLSUNDAYTICKET.TV is also being expanded to include many people who aren't DirecTV subscribers. It will be available to residents of apartments, condos, and townhouses where restrictions prevent them from installing a DirecTV dish at their home. NFLSUNDAYTICKET.TV is also being made available to all four-year colleges and universities with a discounted price for their students. To check whether you qualify for NFLSUNDAYTICKET.TV without a DirecTV subscription, visit nflst.directv.com and click on the Verify Me button. Enter your address or school name to see if you're eligible.

It's not clear exactly when the new NFL channel will be available on Roku. The NFL Now splash screen only says to "check back at Kickoff for the launch of the NFL channel", with no indication of whether the referenced "kickoff" is a regular season game or a preseason game.