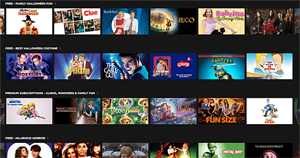 If you're looking for Halloween entertainment, The Roku Channel's Halloween Hub has a wide variety of free content themed around this holiday. Whether it's comedy, family fun, or screams that you're after, you'll likely find it on the Halloween Hub. Here's a sampling of what's available. (Note that some of the content is R-rated and may not be appropriate for younger family members.)

HILARIOUS HORROR - Thirteen horror-themed comedies, including Mike Meyers in So I Married an Axe Murderer (1993), The Bogus Witch Project (2000) in which Pauly Shore introduces a collection of short films spoofing The Blair Witch Project, and Ghoulies 3: Ghoulies Go to College (1990).

CHILLS & THRILLS - Nine mysteries and thrillers, including Leonardo DiCaprio in Shutter Island (2010), where a 1950s lawman pursues a murderess who appears to have vanished from a locked room within a fortresslike psychiatric hospital, and the genre classic The Amityville Horror (1979), in which a a couple (James Brolin, Margot Kidder) battle a demonic presence in their new home, the location of many gruesome murders a year earlier.

SCREAMS ON THE SMALL SCREEN - Ten mystery and thriller TV shows, including the miniseries Rosemary's Baby about a pregnant young couple that encounters devil worship in their Paris apartment building, and 12 seasons of Unsolved Mysteries, which features footage from home videos depicting amazing events, escapes and disasters.

CLASSIC HORROR - Eight must-see classics like Night of the Living Dead (1968) and House on Haunted Hill (1959).

Those are just some of the free categories available, and you'll find even more content for those subscribe to premium services through The Roku Channel. To find Halloween Hub, just open The Roku Channel, scroll down to the Horror category, and scroll right to find it listed along with the horror movie offerings.