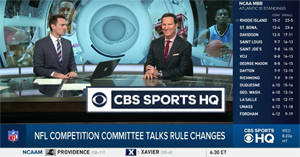 CBS has launched a new 24-hour streaming sports news network, CBS SPORTS HQ, that features live, anchored news, highlights, and analysis for all major sports. The CBS SPORTS HQ channel replaces the old CBS Sports channel on Roku, and is available as an app on other devices. CBS SPORTS HQ is free to all users, with no pay TV subscription required.

The CBS SPORTS HQ broadcast includes game breakdowns and covers each day's top sports stories, and also has several recurring segments that include News in 90, Headlines, Morning Trends, and HQ Refresh. In addition to the live stream, video on demand lets you watch any segment from the last hour or so, along with recent "Top Videos" and videos categorized for specific sports.

Sports coverage, breaking news, analysis, and previews will be provided by CBS Sports announcers and reporters, and live streaming coverage will be led by experienced anchors and analysts, with involvement from CBS Sports Digital writers and insiders.

CBS Interactive CEO Jim Lanzone said in a press release announcing the new app that "CBS SPORTS HQ is for fans who want more coverage of the game. Sports fans can now get the news and highlights they want in a true, round-the-clock sportscast on any device, where and when they want."

In addition to Roku, CBS SPORTS HQ is available on Amazon Fire TV, Google ChromeCast, and Apple TV. The live feed can also be streamed through web browsers and the CBS Sports mobile app for iOS and Android, and through Roku's standalone CBS News and CBS All Access channels.