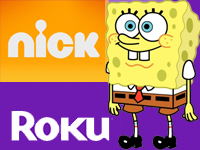 Nickelodeon, the children's cable network responsible for popular kids' shows like SpongeBob SquarePants and Teenage Mutant Ninja Turtles, has launched their own Roku channel, Nick. In doing so, Nickelodeon joins several other cable networks in the TV Everywhere movement, which allows those who subscribe to a network through a participating cable or satellite TV service to watch live and on-demand video from that network through Internet-connected devices.

The launch of the official Nick channel on Roku comes less than four months after Nickelodean owner Viacom filed suit against the operator of the private Roku channel Nick Reboot, which broadcast Nick shows without Viacom's permission. Unlike that now-defunct unauthorized channel, the official Nick channel requires viewers to subscribe to Nick through a cable or satellite TV provider in order to gain full access to the Nick video library. To authenticate the channel, your TV provider must be one that allows access, and you must have a subscription that includes the Nick channel. As of June 2015, AT&T Uverse, Cox, DirectTV, Time Warner Cable, and Verizon FiOS are among the major providers that allow Nick access; Dish and Comcast Xfinity do not. (A full list of providers can be found by loading the channel, going to the Settings option by pressing the * key, and selecting "Get Started.")

Unable to authenticate? You can still keep your kids entertained with a number of unlocked videos. All of the shows have at least 2 or 3 unlocked full-length episodes. If you're hoping to keep the adults entertained with Nick at Nite classic TV shows, though, you won't find them on this channel. Nick's Roku channel is aimed squarely at children, with 30 shows that include iCarly, The Fairly OddParents, and Power Rangers Dino Charge in addition to the previously-named SBSP and TMNT.

For more information, including a link to add the channel to your Roku player or Roku TV, visit our Nick channel page.