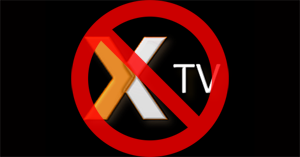 Update (Sep 21, 2017): XTV-2, consisting only of content said to be used with permission or in the public domain, is now available as a non-certified (private) Roku channel. Read our review of XTV-2 and find the channel code here.

Many fans of XTV, a popular private (also called "non-certified") Roku channel, are angered and dismayed to find the channel removed from their Roku devices. Instead of seeing live streams of cable networks and on-demand episodes of popular TV series, users launching XTV on their Rokus are being greeted with a notice that "This channel is no longer available due to a third party copyright claim and for violating Roku's Terms of Service."

XTV, for those unfamiliar with the inner workings of the channel, claims to not itself host any video content, pirated or otherwise. Rather, the channel conglomerates content and streaming video that is already available elsewhere on the Internet. Some of this content may come from legitimate sources, but may not be intended for streaming to Roku - for example, a cable news channel streaming its live feed through its own website. Other sources may indeed be offering pirated content, and these video feeds are often shut down, only to appear later from a different Internet address. For these reasons, XTV content has often been of varying video quality, and content within the channels will come and go as pirate sites are shut down and moved.

The shuttering of XTV, and similar channels that stream pirated or unauthorized content, should come as no surprise. Just last month Roku added a notice that pops up when anyone attempts to add a non-certified channel. The notice reads in part, Roku requires all channels to abide by Roku’s terms and conditions, and to distribute only legal content... You acknowledge you are accessing a non-certified channel that may include content that is offensive or inappropriate for some audiences. Moreover, if Roku determines that this channel violates copyright, contains illegal content, or otherwise violates Roku's terms and conditions, then ROKU MAY REMOVE THIS CHANNEL WITHOUT PRIOR NOTICE, AND YOUR ACCOUNT MAY BE BLOCKED FROM ADDING ANY OTHER NON-CERTIFIED CHANNELS.

This change came on the heels of a court in Mexico banning the sale of Roku devices following Roku's loss of a legal case in which Cablevision claimed that the streaming media players are often used to view pirated channels. According to Reuters, a Cablevision spokeswoman told them by email that "Cablevision cannot allow the content that it licenses from domestic and foreign companies to be illegally used... We would also like Roku Inc to better supervise the use of its software so that it's not used inappropriately." This "better supervision" is what Roku, Inc. now appears to be doing.

XTV is not the first or only Roku non-certified channel to be shut down, but perhaps most notable was when media giant Viacom sued the owner of the website nickreboot.com, which operated the private Roku channels Nick Reboot and Cartoon Network Reboot, in 2015. Viacom's complaints included copyright infringement, trademark infringement, cybersquatting, and unfair competition, and Viacom alleged that the operators of nick reboot "unlawfully distributed, reproduced, performed or otherwise exploited pirated copies of the Viacom Works to users in the United States (and elsewhere)." (Worth noting is that, unlike XTV, nick reboot profited by charging subscription fees and hosted Nickelodeon and Cartoon Network content, rather than offering a free interface to content hosted by others.)

According to one Reddit post on the topic, the channel owner is working on a new version of XTV, which will be minus the content for which Roku, Inc. received the copyright complaint. Others have posted elsewhere that the owner of XTV stated in emails that the new XTV would include only content for which permission had been obtained to include in the channel. In that case, you'll likely find a shell of the old channel, it's unlikely any major rights holders will give permission to stream their content for free on XTV when they are receiving payment for allowing that content to be shown on pay TV and pay streaming services like Hulu and Netflix.

It's likely that someone will jump into XTV's space and create a similar non-certified channel. Once another copyright infringement complaint is received, Roku, Inc. will shut that channel down, and thus will begin a cat-and-mouse game familiar to those using pirate websites. Roku, Inc. was likely trying to minimize copycatting of banned channels by including the warning in their non-certified channel notice that "if Roku determines that this channel violates copyright, contains illegal content, or otherwise violates Roku's terms and conditions,... YOUR ACCOUNT MAY BE BLOCKED FROM ADDING ANY OTHER NON-CERTIFIED CHANNELS." It's doubtful that Roku is going to prohibit someone from adding non-certified channels because they installed one or two channels without knowing that content in those channels was pirated, but that statement will likely discourage users from continually and knowingly adding new versions of banned channels. And if doesn't discourage them, Roku has provided fair warning to those who do so.

RokuGuide.com is not affiliated with nor endorsed by Roku, Inc. Any opinions expressed here are those of the author and do not reflect opinion or policy of Roku, Inc.