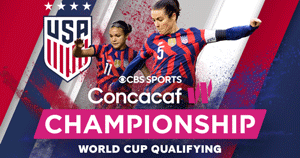 The 2022 Concacaf W Championship (CWC) opens on July 4th in Monterrey, Mexico, with eight clubs competing to qualify for the 2023 FIFA Women's World Cup, including the United States vs. Haiti at 7:00 pm Eastern. Stream the action live on Roku and see if the United States retains the title of CWC champion, which they won after defeating Canada 2-0 in the 2018 Final.

In the United States, the 2022 CONCACAF W Championship, the 11th edition of this quadrennial women's soccer championship, will be streamed live on Paramount+ (continue reading to find out how you can get your first month free). Eight teams from North America, Central America, and the Caribbean will play in the tournament, which will take place from July 8 - 14, 2022. The teams are divided into the following groups:

After round robin group stage play at Estadio Universitario and Estadio BBVA, the top two teams in each group will move on to the semifinals and will qualify for the 2023 FIFA Women's World Cup in Australia. The semifinals will be played on on July 14 at Estadio Universitario, while the final and third-place matched will be played on July 18 at Estadio BBVA, with the Champion qualifying for both the 2024 Paris Olympics and the inaugural Concacaf W Gold Cup in 2024.

To watch 2022 Concacaf W Championship on Roku, just install and launch the Paramount+ app on your Roku or other device. If you don't already subscribe to Paramount+, you can try Paramount+ for 1 month FREE with promo code GLORY. You can cancel at any time, but plans start at $4.99 if you choose to continue after your free month. In addition to Roku, you can use your Paramount+ subscription on your computer, mobile phone, tablet and connected devices that include Amazon Fire TV, Android TV, Apple TV, LG, Samsung, and Vizio smart TVs, Playstation, and Xbox. (Free 1-month offer expires on July 18, 2022 at midnight Pacific time.)

RokuGuide.com may receive a referral fee for any purchases or subscriptions made through links on this page. Referral fees help pay for the cost of running this website. See our full FTC Disclosure Statement for more information.