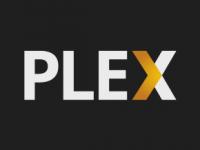 The Plex channel has long been one of the most-popular and most-watched channels in the Roku Channel Store. The channel recently received a significant visual redesign and was upgraded with new features. Best of all, the Plex Roku channel is now free to all users. The $5 fee is gone, although Plex Pass users still need to pay a subscription fee for advanced features.

Not having used Plex myself within the last couple of years, I decided to take it for a spin and see what it has to offer. I found that Plex is an excellent media server that offers a simple way to stream videos, photos, and music from my computer and the Internet to my Roku. I understand why Plex is so popular on Roku. However, all is not perfect. Some long-time Plex users complain that the updated Roku channel is a step backward, with the loss of search and lists of unwatched media. Here's a rundown on what you will find, and what you won't find, in the current Plex for Roku.

But first, some background information for those who are new to the Plex environment. The Plex system makes it possible for you to stream videos, photos, and music from your computer and from websites to your Roku and many other devices. You will need to install the free Plex Media Server onto your computer. The media server organizes files from your personal media collection on your computer or cloud storage and streams them to the Plex channel on Roku and to Plex apps on other devices connected to the same network. You can also add web videos to your Plex library using the Plex It! bookmarklet in your web browser, and you can stream content from well over 100 Plex channels, including A&E, CBS, CNN, Comedy Central, Food Network, FOX, HGTV, National Geographic, The New York Times, and many more. For more information on getting started with Plex, visit our Plex channel page. The Plex Quick Start Guide will also lead you step by step through the entire set up process.

DigitalTrends recently took the new Plex for Roku on their own test ride, and concluded that
"this interface is more user friendly than previous versions, ideal for visiting guests that want to browse through your movie, music or photo collection." The home screen has a heavy focus on new content, prominently displaying recently added music, photos, home movies, and any other types of new content. I had added several YouTube and Vimeo videos to my Plex queue using the Plex It! bookmarklet, and these were shown as "Watch Later" videos on the home screen. If you have more than one Plex Media Server on your home network, or other users, you can change these using the pull-downs at the top right of the home screen. 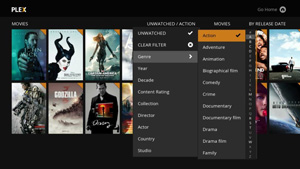 The home screen also has prominent links to your Channels, Playlists, and all of your media libraries, including Music, Photos, Home Videos, etc. (These libraries can be created, renamed, and populated from within the Plex Media Server on your computer). The Channels selection takes you to a list of your installed Plex channels, or plug-ins - nothing special here. Go to any of your media libraries, though, and you'll find that Plex has done some personal categorizing for you. The categories will depend on your own collections. For example, my Home Videos library arranged files by Recently Added, Videos from 2012, Videos from the 2000s, and Unwatched Videos. Likewise, my Photo categories included Photos from 2008, Photos from the 2010s, and This Month in 2008. My Movies were arranged under Recently Released, Top Movies in Adventure, Top Movies by Joss Whedon, and so on.

The selection of categories is rather arbitrary and random. The photos in my collection have file dates from 2005 through yesterday, so I have no idea why 2008 was chosen to feature. When I exited the photo library and later returned, the main photo screen was featuring Photos from 2006 and This Month in 2013. Likewise, when I exited Movies and later returned, Top Movies by Joss Whedon changed to Top Movies with Annette Hathaway.

Where the new Plex channel is likely to be most useful is in the filtering and sorting that's available for your music and photos. You can show all of your music or narrow it down to collections, and you can choose whether to display Artists or Albums. Then you can sort by Date Added, Date Played, Play Count, Name, or Rating.

Your photo collection offers extensive filtering based on EXIF data, but you will have to select "All" from the main Photos screen to access it. Here you can filter by Collection, Camera Make, Camera Model, Aperature, Shutter Speed, ISO, and Lens. You can then sort by folder name, file name, or album name. After sorting, select a photo and you'll have the ability to launch a slide show.