How to watch the 2016 Summer Olympics on Roku 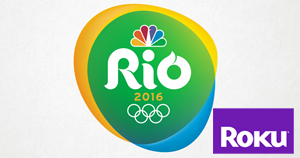 Roku users wanting to watch the 2016 Summer Olympic Games are in luck, whether they have cut their cable cord or not. NBCUniversal will broadcast 2,084 hours of the Summer Olympics across 11 networks. You will need to subscribe to either Sling TV or have a qualifying subscription to a cable or satellite TV provider for live coverage, but others users can still watch highlights through the NBC Sports channel.

If you subscribe to a participating cable or satellite TV service, you can access live and on-demand content using the NBC Sports app. NBC will live stream a total of 4,500 hours of programming, including all Olympic competition, not only to the Roku channel but also to the app on Apple TV, Fire TV, Samsung TV, Windows 10, Xbox One, and Android and iOS mobile devices. In addition to live coverage, the NBC Sports app features full event replays and video highlights. You can browse video on demand by individual sport.

Olympics coverage is offered as a separate channel within the app. Press the * button on your Roku remote to switch between the Olympics, Sports, and Spanish channels within NBC Sports. If you have not authenticated the channel, press the * button, select the Sign In option, then follow the on-screen instructions. A list of participating pay TV providers can be found at nbcsports.com/activate.

NBCUniversal's Olympics coverage will span several different broadcast and cable networks. Many of these are available to Sling TV subscribers. Not a subscriber? Click here for a 7-day free trial.

Sling Blue provides access to NBC Sports Network, Bravo, and USA Network. Sling Blue subscribers in Chicago, Dallas, Hartford, Los Angeles, Miami, New York, Philadelphia, San Francisco, San Diego and Washington, D.C. can also watch the local NBC broadcast. CNBC and MSNBC are part of the World News Extra add-on, but from August 1 through the last event on these networks, all Sling Blue customers can access a free preview of MSNBC and CNBC. The Golf Channel is available to Sling Blue customers who subscribe to the Sports Extra add-on pack, and Sling Blue subscribers with the Best of Spanish TV package can watch Spanish coverage on NBC Universo.

Here is the coverage you can expect on each network:

Bravo - Bravo will be the home of Olympic tennis, with 94.5 hours of live coverage from Saturday, August 6, through the women’s singles final on Saturday, August 13 and the men’s singles final on Sunday, August 14. Bravo will televise more than 12 hours Olympic tennis, from 9:30 a.m. ET until 10 p.m. ET, during each of the first five days. Each of the final four days will consist of eight hours of coverage, from 11 a.m. ET to 7 p.m. ET. (Available to Sling Blue subscribers.)

USA Network - USA Network will televise 110.5 hours of programming from Rio, with coverage that begins two days before the Opening Ceremony with women’s soccer on Wednesday, August 3, and concluding on Sunday, August 21, the final day of the Games. USA will present eight hours of coverage, from 9 a.m. ET to 5 p.m. ET, on most weekdays. along with weekend programming. USA's coverage of the Rio games will include men's basketball, beach volleyball, cycling, rowing, synchronized swimming, volleyball, water polo, and more. (Available to Sling Blue subscribers.)

CNBC - CNBC will televise 42 hours of coverage beginning on Saturday, August 6, and concluding on Friday, August 19. CNBC's weekday Olympic broadcasts will be from 5-8 p.m. ET, after completion of business and financial programming. The network will showcase elimination-round coverage of basketball and volleyball, as well as archery, beach volleyball, cycling, rugby, water polo, wrestling, and many more sports. (Available as a free preview to Sling Blue subscribers.)

MSNBC - MSNBC will broadcast 78.5 hours of Summer Games programming, including men's basketball, beach volleyball, rugby, soccer, volleyball, and water polo, and other sports. Coverage begins on Saturday, August 6, and concludes on Saturday, August 20. Ten of the network’s 15 days of coverage will be from Noon ET to 5 p.m. ET. (Available as a free preview to Sling Blue subscribers.)